Our roots run deep in western Oregon, and everything we do today builds on the legacy of our founders, Fred and Frances Sohn.

Fred emigrated from Germany as a young man in 1936, eventually making his way to the Pacific Northwest with his wife, Frances. In 1950, the Sohns built a sawmill on the banks of the South Umpqua River in Roseburg, Ore. Fascinated with technology, Fred hired the best talent and used innovation to differentiate his company in the competitive world of post-World War II lumber manufacturing.

Over the next 50 years, Fred’s passion for innovation would change mill production worldwide. Taking the unprecedented step of assembling an electronics research team, Fred created the industry’s first fully computerized sawmill and later patented 3-D scanning technology to maximize log recovery. Today, every production mill in the world relies on that computer technology.

Fred’s zeal for finding a better way extended to forest management as well. In the 1970s, the company aggressively began buying cut-over lands and restoring them, planting up to 1 million seedlings a year.

The 1990’s were a time of transition. Two of Fred’s five sons, Howard and Rick, moved into company leadership positions as the family and the company looked to the future. Continued investment in manufacturing was matched with significant additions to the forest land base. The company’s land holdings more than doubled in size over a 10 year period.

Transitions continued as a new century began. In 2001, the Sohn Family moved away from its manufacturing foundations selling it’s sawmill and veneer plant. Fred retired and his sons assumed leadership of the company focusing on its forest lands. The culture Fred established through investment in people, research, equipment, and technology remain integral to the company’s success today.

Rick Sohn’s retirement as president in 2008 marked a successful transition to non-family leadership. The board expanded to include directors with experience managing family businesses, as well as welcoming third-generation Sohn family members.

Today under President and Chief Executive Officer Toby Luther, Lone Rock is a balanced and diversified real assets and natural resources investment company. We have institutional investment partners looking to add to their portfolios with us because of our people, performance, and vision. 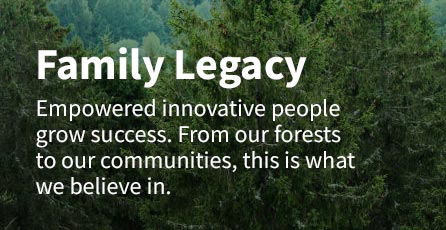 Meet Some of Our People

Here at Lone Rock, we know that we are only as good as the people we have the pleasure of employing. And luckily for us, we’ve got some pretty awesome people on our team! Here are just a few:

From coach to harvest manager, we’re proud to have employees like Chris making a difference in our community on and off the clock!

We’d like to introduce Eric Parazoo and Tony Geiger, our logging supervisor and assistant supervisor. Their attention to details and expertise coordinating complicated logging systems safely is part of our success.

Meet Joe Newton, Lone Rock’s Lands Manager, and his story of growing up in Roseburg and returning to follow in his family’s tradition of working as a professional forester.

We’d like to introduce you to Katie Nichols—our first female forester! She is our Sustainability Coordinator and Internal Operations Administrator.

We handle every aspect of our business, from management to operations. Lone Rock’s success rests on five pillars:

We own and manage more than 130,000 acres of productive Douglas-fir forestlands in southwestern Oregon.

Sophisticated planning systems allow us to capture greater value from our timberlands.

Our sales matrix strategy helps us achieve the highest long-term value while being good stewards of the land.

Our vertical structure allows quick and nimble reaction to the market, and better control of outcomes.

Putting all aspects of operations under one roof gives us greater flexibility, agility, and control.

Putting all aspects of operations under one roof gives us greater flexibility, agility, and control.

Empowered innovative people grow success. From our forests to our communities, this is what we believe in.